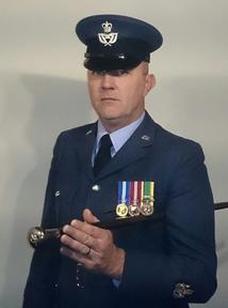 Clinton Marsh has won the race to become the top warrant officer in the RAF Air Cadets. Clinton, aged 44, of Cinderford, Gloucestershire, won the title of Commandant’s Warrant Officer in a fiercely fought competition amongst some of the best warrant officers in the national voluntary youth organisation. And picking up the baton means he is now a personal advisor to Commandant Air Cadets Air Commodore Dawn McCafferty. Clinton will now lead the warrant officer (WO) and senior non-commissioned officer (SNCO) cadre - a hugely prestigious post in an organisation which has 45,000 air cadets and 10,000 volunteer staff.
Air Commodore McCafferty said: "I have no doubt that WO Marsh has all the personal and professional attributes to make an outstanding contribution in this prestigious role. I very much look forward to working with him over the coming years and know he will do his utmost to represent the SNCOs and WOs, whilst maintaining a strong focus on the cadets we support".
WO Marsh said: "I feel incredibly honoured to have been given this opportunity and I am delighted to have the chance to take forward many of the plans and aspirations initiated by predecessors. I have big boots to fill but I will do my very best to support the Commandant and to ensure I represent the cadre as we move towards 2020". WO Marsh, who will take up post on 1 March, will replace the much loved and highly regarded WO Gaz Tonks who has had to resign prematurely from the post due to ill health. 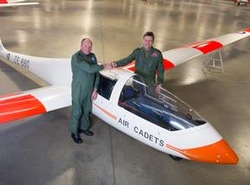 Delivery of RAF Air Cadet’s national gliding – which involves the world’s largest fleet of gliders – today switches to the command of the newly reformed No.2 Flying Training School (No. 2 FTS). The school becomes a new centre of excellence in which young people can win their wings – often before they pass their driving test. With its headquarters at RAF Syerston in Nottinghamshire, No. 2 FTS will oversee the gliding training programme for up to 45,000 air cadets aged 13-19. With 25 volunteer gliding squadrons around the UK, it provides training for the Air Training Corps’ 1,000 squadrons and 203 Combined Cadet Force (RAF) Sections in schools. Group Captain John Middleton, said: “I feel honoured to have the opportunity to take air cadet gliding forward into a new era and thank all at No. 3 Flying Training School for taking excellent care of air cadet gliding in recent years.“My long-term aim is to mature RAF Syerston into the air cadet centre for aviation excellence, whilst maintaining the high safety standards of air cadet gliding. Commandant of the Air Cadets, Air Commodore Dawn McCafferty said: “It feels as if gliding is coming home – back to the Air Cadet Organisation where it belongs. For the gliding community to have its own dedicated FTS is a great tribute to the excellence of the gliding instructors up and down the country who do so much to keep the air in air cadets.” 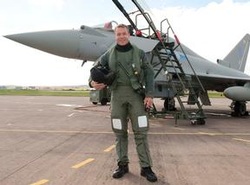 The Royal Air Force Air Cadets are delighted to announce that six-time Olympic gold medallist Sir Chris Hoy has accepted an invitation to become an Ambassador for the Organisation. Sir Chris has close family ties to the RAF, having flown in a Typhoon aircraft at RAF Leuchars, and has already demonstrated a very keen interest in the Air Cadet Organisation – a modern, dynamic, air-minded youth organisation which offers fun and challenging opportunities. In accepting this prestigious appointment, Sir Chris will assume the Ambassador rank of Honorary Group Captain, and having recently announced his retirement from professional cycling, he will hopefully find time to spend with cadets and volunteers at major events and competitions.

It was a clean sweep  for South East Scotland wing when A/Cdre McCafferty presented  the three top Regional Trophies to this year’s winners at the Scotland & Northern Ireland Field Day at HMS Caledonia Rosyth. This years winners were:

After five years at the helm, Dawn McCafferty, Chairman of the RAF FF, will leave the Federation to take up the appointment as the new Commandant of the Air Cadet Organisation (ACO). Dawn enjoyed a varied 23-year career in the RAF which culminated in her appointment as Group Captain Inspector of Recruiting for the RAF.

The current ACO Commandant, Air Cdre Barbara Cooper, said “I am delighted to announce that Gp Capt Dawn McCafferty RAF (Ret'd) is the preferred candidate to become the next Commandant Air Cadets. Subject to successful completion of the necessary administrative requirements, she will assume command in the rank of Air Commodore (FTRS) at a date to be confirmed but anticipated Aug/Sep 12.”

Dawn McCafferty said “I am thrilled to be given the opportunity to return to a uniformed role as a Full Time Reservist and the promotion is a wonderful bonus. Clearly, I will be very sorry to leave the RAF Families Federation, having developed its work over the past five years. I am extremely proud of all the Federation has achieved to-date and I know that my team will continue to deliver a professional service to RAF families pending the arrival of a new leader. 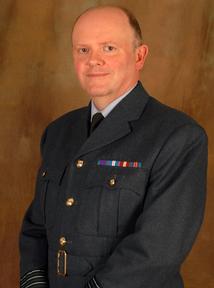 Jim Leggat has been appointed as the new Regional Commandant for the Air Training Corps Scotland and Northern Ireland Region. Group Capt Leggat, 53, who was born and raised in Scotland and was an air cadet and an officer with the ATC before his 29-year RAF career is looking forward to the new challenge. He said: “I have come full circle because I started out as a cadet. I am absolutely thrilled to be offered the post because I can give something back to the RAF and the Cadet Movement. I relish the opportunity to work with the organisation again.”
“Some of the people I knew years ago when I was a member of the Training Branch of the RAF Volunteer Reserve working with the ATC are still there so it will be good to see them again.” Jim, who grew up in Fife and the Lothians has  had a career in the RAF as a provost officer since 1983 having started out as a civilian policeman.

Commandant Bids Farewell to the ACO

Air Commodore Barbara Cooper has bid a fond farewell to the Air Cadet Organisation after two years in the role of Commandant Air Cadets.  Air Commodore Cooper, who will retire from the Royal Air Force in August, left Royal Air Force College Cranwell for the final time to be met at the main gate by a group of 45 cadets and staff. Earlier in the day the Commandant was greeted at the entrance of HQ Air Cadets by the permanent staff that she has led for the last two years. She was presented with gifts by staff members, including mementos of her time as Commandant (pictured below). Moments later Air Commodore Cooper was driven off camp by her driver and ADC.

Air Commodore Cooper has since released the following message about her time as Commandant Air Cadets:

Dear Friends and Colleagues of the Air Cadet Organisation

I am now in the last week of command and I want to take the opportunity of thanking all of you for your support and friendship over the last 2¼ years that I have been Commandant. The ACO remains the best uniformed youth organisation in the world and that is down to the dedication of adult volunteers, parents and staff. What we do is critical for the wellbeing of our country – we are producing responsible citizens of the future and there can be no more important work than that.

Keep up the good work – we remain in challenging times and I know that you will afford my successor, Air Cdre Dawn McCafferty the same much appreciated and needed support that you have given to me. Together, I am sure the ACO will continue to grow from strength to strength.